Have you ever looked at code reading/writing to a large or infrequently used datastructure and thought “What a waste of the cache?” Look no further than nontemporal memory operations for all your cache-bypassing needs.

While the Intel documentation is flush with details of how normal stores work, much less attention is given to the characteristics of nontemporal stores. As a result, most of the findings here are inferred from timing data. The full code is available in this repo.

Before embarking on any more advanced analysis, it’s useful to confirm that the nontemporal stores won’t write-allocate and therefore won’t pollute the cache. Our benchmark loop will be:

We’ll try writing between 0 and 6000 cache lines of either normal stores or nontemporal stores, and time iterating a shuffled linked list.2 The results are: 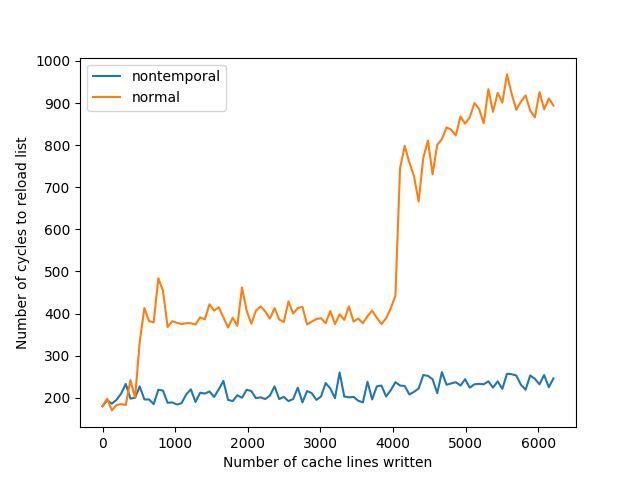 As one would expect, write allocation from normal stores evicts our list from the cache, but nontemporal stores don’t write-allocate and hence don’t evict our list. The results might seem obvious, but it’s worth confirming that there aren’t unexpected interactions between the cache system and nontemporal stores.

Nontemporal stores are documented as being unordered with respect to other stores as a performance optimization. How this plays out in practice is important since nontemporal stores have a huge, albeit usually unobserved latency. If in-flight nontemporal stores can occupy resources that would otherwise be used by normal operations, the processor would be unable to hide their latency.

To test this, we’ll execute a series of nontemporal stores before a series of normal stores and measure any interference or performance impact. The inner timing code we run will be:

We can run a test trying each combination of NT_LINES and LINES from 0 to 100, at increments of 5 each.3 The results are: 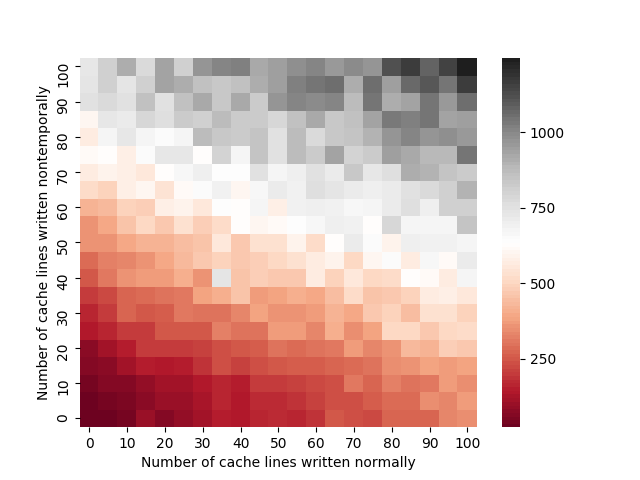 The results confirm what one would expect:

Importantly, there doesn’t seem to be any additional cost to subsequent stores after a series of nontemporal stores is executed. Contrast this with the case where we execute an sfence instruction4 between the nontemporal and normal stores: 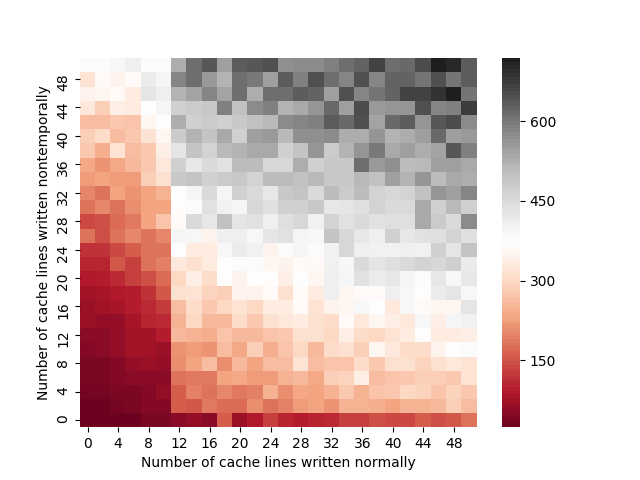 This won’t be relevant except when writing multicore code, but the previous benchmark is a great example of what happens when nontemporal stores block normal stores. Eventually, normal stores can’t issue any more since the store buffer fills up and the processor just stalls.

Write combining buffers exist on the CPU to help coalesce stores into a single operation. On normal stores, this allows reads-for-ownership to coalesce for consecutive stores to the cache line, but otherwise is not fundamental to performance. For nontemporal stores, they play a much more fundamental role.5

Since the memory bus on Intel processors will break up transactions smaller than 64 bytes into many smaller transactions, write combining buffers allow a set of nontemporal stores to the same line to accumulate until the entire line is written. There’s a limited number of these buffers, so one must ensure that whole cache lines are written at once with nontemporal stores.6 We can get some basic idea of how bad this is with the following benchmark:

We’ll run this code in the inner loop:

We initiate a series of nontemporal stores and issue a strong fence to time how long they take to complete. As expected, writing partial cache lines seriously hurts performance: 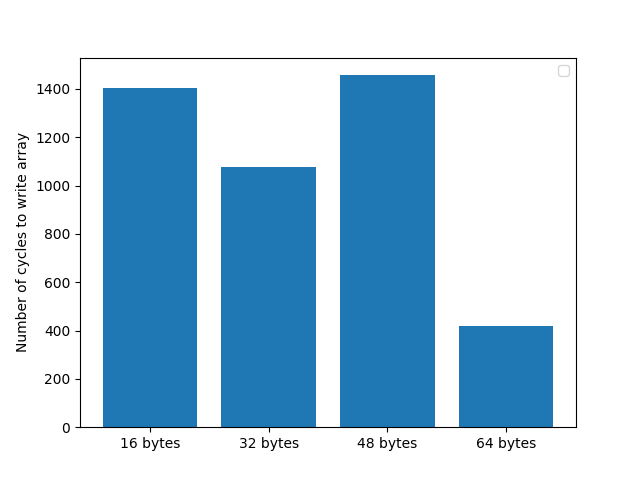 These instructions should only be used with care and benchmarking+profiling of an application beforehand. You’re explicitely bypassing the single most important modern hardware optimization. Make sure that you consistently have a cache problem, and that nontemporal stores can help it, before having your software use them.

What can we do with just this?

Unfortunately, there’s not a whole lot that we can do with just stores on a single thread. Nontemporal stores could be useful for writing to low-priority threads on a different socket, but ordering via fences and the performance implications of the required fences are tricky enough to deserve their own article. For the sake of this article, I’ll write a fairly contrived example; however, the interesting applications don’t arise until we can access nontemporal loads and have a good multicore story.

Consider this situation: You have some function which receives a long message containing a user ID, looks up that user in some datastructure, and forwards the result on to some different processing pipeline. Furthermore, you must keep the last N received messages in a buffer to log upon a rare failure case, enough messages such that writing them pollutes your cache. We’ll benchmark this scenario and see how nontemporal stores reduce the cache pressure of this buffer and keep the lookup datastructure in cache. The basic outline of our test code will be:

We’ll adjust the number of IDs in the map (and in the message) and see how each performs. If we store 50MB of old messages, the results are: 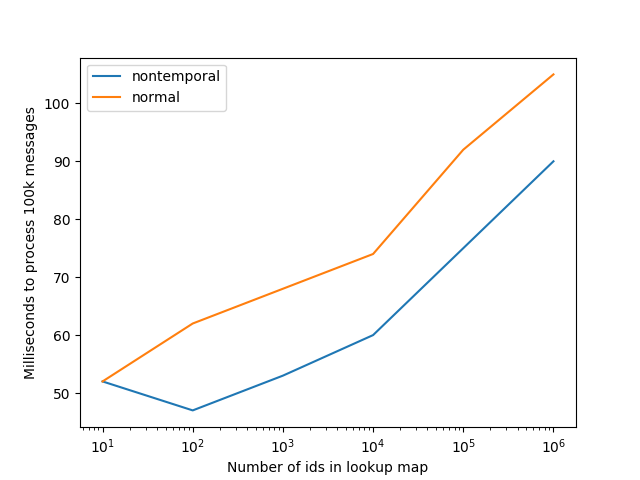 We can plot the performance difference between the normal and nontemporal stores for varying buffer sizes as well: 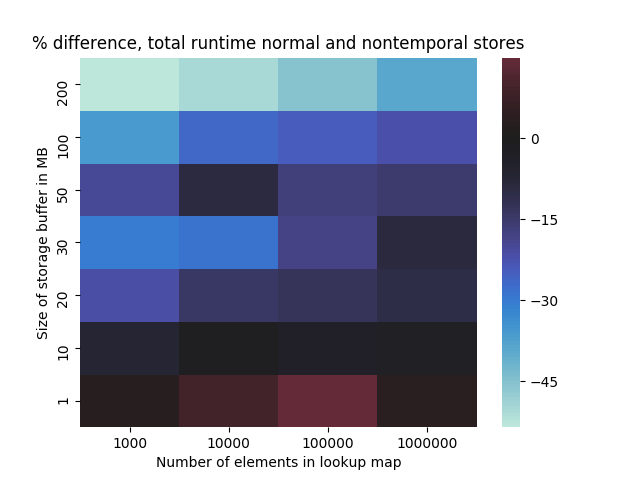 And as a sanity check, the same heatmap but for the average number of cycles spent in the lookup table: 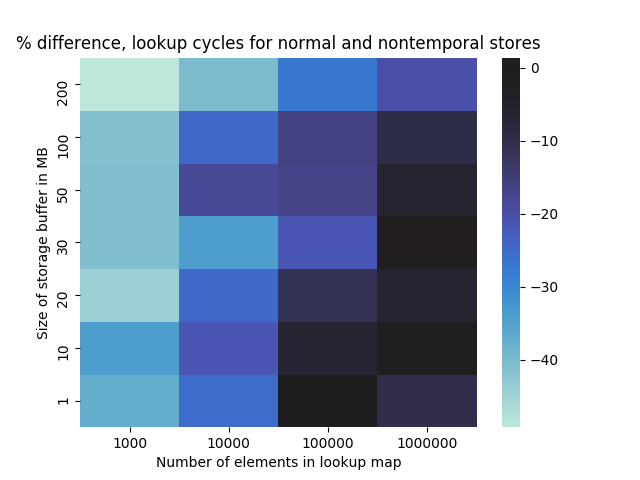 As we make the message buffer larger, nontemporal operations reduce cache pressure in the tree lookup and we see a performance improvement. Larger trees tend to show less improvement as the tree itself does not fit in the cache and the benchmark does not perform enough iterations to load the whole tree. Although this is essentially a re-demonstration of the simple write allocation test done earlier, it is useful to confirm in a psuedo-real application. Hopefully, this was sufficient to demonstrate that nontemporal operations, even just stores, have a meaningful use in high performance applications.7 With later posts we’ll see how useful nontemporal operations are when we can load past the cache as well.

1. Nontemporal stores were introduced in SSE, and loads in SSE 4.1↩
2. Iterating a list help reduce variability by having to hit multiple lines in a prefetcher-invisible way↩
3. There are a huge set of variations of this to test - nontemporal store for lines in L1? L2? L3? Normal stores to lines out of cache? I don’t want to spam this with minor variations of the same benchmark↩
4. sfence enforces ordering between stores, but is weaker than mfence in that it doesn’t enfore store-load ordering. In practice this means it has no effect on normal stores, and prevents normal stores from leaving the store buffer as long as a nontemporal store is still in flight↩
5. This is an extremly simplified discussion of write combining buffers, and confusingly different than write combining memory↩
6. I haven’t run benchmarks on what constitutes a block, but almost all sensible cases will be in a memcpy-like setting where the stores are issued as fast as possible↩
7. One should run all the tests from the repo, since results can vary based on the hardware even within a product line↩